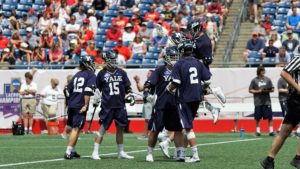 Emotion and momentum. So often in sports these are the deciding factors. So often in sports the first gives rise to the second. When these mount a pendulum and arc from one team to the other, we as fans, vicariously share in those swings. And the more invested we are in “our” team, the greater the intensity of our emotions. The most recent demonstration came in Monday’s NCAA Men’s Lacrosse Championship game when the Yale Bulldogs edged the Duke Blue Devils 13-11 to claim the Eli’s first ever NCAA lacrosse title.

Oftentimes, even in the heat of the moment we can identify specific pivotal plays that push the pendulum in one direction or the other. Oftentimes in lacrosse, it’s a defender who prompts the emotional response. A clean but powerful hit, a helicopter check or a goal by a long pole can provide the excessive juice that jump starts his entire team. Or it can come from the last line of defense – the goalkeeper.

Perhaps more than any other player on the field, the goalies has to surround himself in a bubble of intense focus and a contradictory combination of complete short term amnesia the opponent scores and muscle memory when he makes a save. The save can not merely create momentum for his team but can also create personal rhythm and focus that extends from that point through the remainder of the game.

This was the case for Duke goalie Danny Fowler. After giving up three goals on three shots in the game’s opening six minutes, Fowler made a relatively easy save on a shot by Yale star Ben Reeves. Although it was more or less routine and didn’t particularly ignite his team, it settled both him and the Blue Devils into a more comfortable rhythm.

After his initial save, Fowler went on to save four of Yale’s next seven shots. His play allowed his team, which was on the verge of being run off the field at Gillette Stadium in Foxboro to gather and calm themselves. The Blue Devils gradually worked their way back into the game to trail 6-4 at halftime.

In the second half, it was Fowler’s counterpart, Yale freshman Jack Starr whose play lit the fuse for the Bulldogs’ offense. Starr had played a respectable first half saving four of Duke’s eight shots on goal but his play to start the third quarter making saves on back to back Duke possessions that helped Yale build a 9-4 lead that would, in the end, prove too much for the Blue Devils to overcome.

While I can’t claim to grasp the hope that Duke fans felt or the anxiety of Yale’s fan base as Duke began to mount a comeback, I can say that when the Blue Devils scored to make the score 11-9 with just 39 seconds to play in the third quarter, I received this message from a friend who is a Maryland fan, “Damn I hate Duke. But they’re good. Got better as the year went along. They are gonna win.”

Happily for him, Jason Alessi scored for Yale 12 seconds later. The Bulldogs would finish the quarter having increased their lead by one. And then, fittingly, the tournament’s Most Outstanding Player Matt Gaudet, scored Yale’s final goal with 8:11 to play that rendered Duke’s final two goals – somewhat aided by the officials’ increasingly rapid imposition of the shot clock warning – moot.

The win confirms three signs of growing parity in the sport. First, although the top four seeds reached the semifinals of both the men’s and women’s tournaments, it was the teams seeded third and fourth (with the third seed winning both) that competed for the titles.

Second, of the four teams in the women’s semis, only Maryland and Boston College – who played in the 2017 title game – repeated their final four appearance. On the men’s side, Maryland was the only team to return to Championship Weekend. 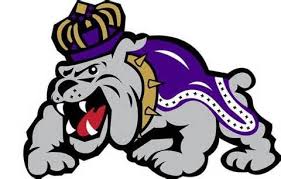 Finally, for the women, James Madison won the first title in program history and became the first team not named Northwestern, North Carolina or Maryland to win the championship since Virginia in 2004. On the men’s side, Yale’s win makes them the fourth team this decade to win a program’s first NCAA men’s lacrosse championship joining Duke (2010), Loylola, MD (2012) and Denver (2015) and, of course, two other programs ended long championship droughts – the 2016 North Carolina Tar Heels (25 years) and the 2017 Maryland Terrapins (42 years).