The stars appeared to be aligned for an unprecedented celebration for fans of Maryland Terrapins lacrosse. Never in the history of lacrosse had both men’s and women’s teams won back to back championships. With both its men’s and women’s teams entering Championship Weekend as the respective top seeds the Terps seemed poised conquer that Everest. But, as Cassius said, “The fault, dear Brutus, is not in our stars but in ourselves.” And on this particular Memorial Day weekend, the faults were not in the stars but in the teams.

A confident Maryland women’s team took the field Friday night to face the Boston College Eagles. Not only had Maryland beaten the Eagles in the 2017 championship game, they had beaten Boston College every time the teams had previously met. And for the game’s first 14 minutes that history appeared to be holding as the Terps raced to a 6-2 lead.

The men’s team was equally confident. Entering their fifth straight Final Four the Terrapins held the title of National Champion for the first time since 1975. Their opponent, the Duke Blue Devils, was making their first Championship Weekend appearance in four years and had lost three straight to Maryland.  If the women’s game started well for the defending champs, the men’s game started disastrously. Mirroring the day’s earlier game in which Yale ran away from Albany opening a 7-0 lead, Duke raced to a 6-0 lead while holding Maryland scoreless for more than 18 minutes. 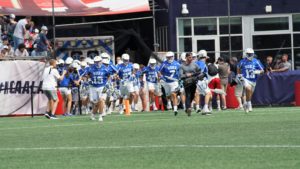 Friday night, the Eagles, who had adopted a boxer’s mentality all season began to counterpunch delivering body blows that not only left the Terrapins gasping for air but saw BC score five straight goals leaving MD facing a facing a 7-6 deficit. But Maryland dug into its championship pedigree and rallied to take an 8-7 lead before ending the half tied at eight.

The men, too, began to rally. They scored twice in 43 seconds and finished the second quarter on a 3-2 run that left them trailing 8-5 at the half.

But both Boston College and Duke had exposed some flaws. Eagles star Sam Appuzzo had identified uncharacteristically poor play by Maryland’s wings on the draw and the less heralded Cara Urbank was dodging past Maryland defenders for easy goals. Saturday, Duke’s defense found way to attack the Terps and forced them into committing six first half turnovers – an unusually high number for the only team in the NCAA to average fewer than 10 per game. When the had the ball, the Blue Devils attacked what had been the weakest spot in Maryland’s defense all season – their short stick midfielders. They punctured that shell repeatedly for easy scores. 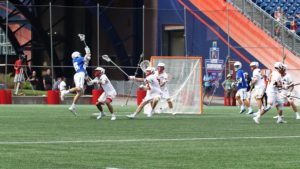 Probably counting themselves fortunate to trail by only three at the half, Maryland roared out of the locker room tightening their defense and scoring twice to climb within one trailing only 8-7 with more than eight minutes to play in the third period. And then, the faults rose again. A turnover by Connor Kelly and a shot by Jared Bernhardt that Maryland didn’t have backed up led to a pair of Duke goals leaving the Terps three behind to end the period just as they had begun it.

The second half in Stony Brook Friday night was truly a game of punch and counterpunch with neither squad able to establish dominance. After yielding the first score of the half to Boston College, Maryland put together back to back goals to edge in front 11-10. BC countered with a pair and the teams traded scores over the next few minutes. Midway through the second half, the score mirrored the halftime tie at 13 all.

At this point, the stars turned against the Maryland women. After an important save by Terps goalie Megan Taylor, freshman Grace Griffin appeared to have put Maryland back in the lead on a free position shot. The goal was nullified by a crease violation. After another Taylor save, Kali Harshorn also failed to convert a free position and then BC’s rising star Sam Appuzzo and their defense took over. Appuzzo scored back to back goals and won both draws. Her prowess proved too much for Maryland to overcome and the dreams of back to back titles ended with a 15-13 loss.

If the stars had fallen out of line in the final 15 minutes of the women’s game, that misalignment had occurred midway through the third quarter for the men’s squad Saturday. Maryland’s play in the fourth quarter only forced those stars further out of line. Trailing by a manageable three goals, following a pair of saves by Blue Devils goalie Danny Fowler on Maryland’s first possession, Duke forced turnovers on the next four Terps possessions allowing them to build the lead back to five. Trailing 12-7 with 6:48 to play, it was only a matter of time before Maryland’s stars were finally extinguished and the goals the teams traded over those final seven minutes a mere formality.